Well, I am ashamed it has taken me this long to update. My only excuse is Russian (the language is killing me).
The last month of my life in one post:

Since the referendum, things have calmed down on the political side of things. The First Minister of Scotland decided to step down, and the campaign is officially over for now. In other words, I won’t have any more cool pictures out and about with political signs. Sigh.

But don’t worry!! I have plenty of pictures of life out and about doing other things in Scotland, so get ready for a super long, photo-overloaded update. Here we go.

I finally got my dorm room (AKA my box) set up. I’m pretty proud of it.

I went to St. Andrews at the end of September to take the LSAT (because I can’t get away from scary law school things no matter where I go). Don’t ask me how I did. My head felt like it had been spun in circles for five hours by the time I met back up with the other girls (who got the spend the entire day exploring and making me jealous). The point of this story: I only have two photos from St. Andrews, because I spent my entire day locked in a classroom DURING the Ryder Cup. 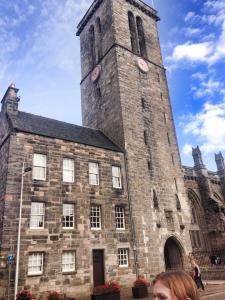 However, I did get to spend that night and the whole next day exploring Dundee. It was purely an accident that we ended up in Dundee- All the hotels in St. Andrews were booked solid. We loved getting to sleep in and watch TV in the hotel, because there are definitely no TVs in the dorms. It was a lazy exploration but an exciting, lazy exploration. We walked, ate, took pictures, shopped, and rested.

THEN, it was Mary Parker’s 21st birthday!! You would think 21 wouldn’t be a huge deal here, since they are legally allowed to drink at 17 or 18. No. It’s still a big deal. We made sure of it.

That club that you see in her birthday pictures? It’s our favorite pretty much for one single reason: it has a light up wall. LIGHT UP WALL.

We also love it, because it’s where most out-of-towners go. I’ve met people from all over the world there. Unfortunately, we only got pictures with some guys from Switzerland (and one guy from France). I’ll make sure I start documenting new international friends better 🙂

To continue the last month of my life, we need to have a discussion about selfies. I have always made fun of them (along with half of the world). I regret that. I have taken more selfies here than ever before in my life, because who better to take a picture when no-one else can but yourself?! Plus, I have to admit: they turn out hilarious.

I’ll never make fun of selfies again. They gave me these memories that I wouldn’t give up for anything

Memories here are unique. I mean how many people can say they spent the first day of October at a poster sale followed by Pumpkin Spice Lattes with a Ghost Tour Guide on the Royal Mile? Yeah. That’s what I thought.

And how many people can say they study where J.K. Rowling wrote Harry Potter? Because, I can. It’s an amazing place to study: mainly because of their hot chocolate.

Two weekends ago, I climbed up to Calton Hill and explored the Edinburgh Ruins. Fun fact: this hill gave me one of the most breathtaking views of my life.

I don’t want to leave a city where street performers do this:

NOW, here is what everyone has been waiting for: MY TRIP TO HOGWARTS. It’s really called Edinburgh Castle, but we don’t need to get technical about it. It was a beautiful sunny day when we went; however, I think the wind tried to make up for the lack of rain.

I did manage to get a few pictures standing upright, though 🙂

And of course, no visit to the castle is complete without having afternoon tea on the terrace:

This castle visit was more special than most, because there was a WWI tribute that day. It was pretty incredible seeing Scots dressed in WWI soldiers’s uniforms and eating stew that was served during their service.

Plus, standing in front of a massive gun that still works and gets fired everyday at one o’clock was pretty exciting, I must say.

Lastly, I feel the need to talk about my new friends. Again. These girls have made my experience here incomparable. They didn’t have to do anything more than just be nice to me, but instead, they went out of their way to include me in things and make my time here unforgettable. I love them dearly already, and I get sad just thinking about not being here with them next year. I was incredibly lucky to meet girls this genuinely nice and caring. And if any of them are reading this, thank you:)

You’re officially caught up on the last month of my life in the land of whiskey. I promise I’ll start updating more frequently, so that y’all do not have to deal with such long posts!
Edinburgh is a magical and wonderful place. It’s far too easy to get caught up in life here and forget about writing everything down!

I’ll be back on here updating soon. Promise. 🙂